Huawei Nova 3i vs OPPO F9: Who is the Winner?

Midrange segment in the cellphone market is of utter importance regarding sales, only because a majority of users in any country is focused on this category which is why companies have started offering a plethora of mid-range devices among which Huawei Nova 3i and OPPO F9 are two of the hottest phones as of now.

Both the device present amazing specs in an attractive price which makes them instant choices for the users that are looking for flagship grade design and amazing cameras within the midrange category.

But how well do these two devices stack up against each other? Check out our in-depth comparison to know which one aces this race.

We were honestly awe-struck by the fantastic design of the Huawei Nova 3i. From the looks, you’ll never be able to guess this phone belongs to the mid-range category. It hosts a metal frame with a glossy finish, sandwiched between the glass body. The back of the phone is made of 2.5D glass which makes it harder to scratch. It seems strikingly similar to the Huawei P20 Lite with only a difference of gradient color

On the other hand, OPPO F9 also offers a gradient color with a petal pattern on its back which is a sight to behold and equally appealing as the Nova 3i, but unfortunately, the company’s poor choice of material may drag the phone down.

The device is made out of Polycarbonate but is polished so well that one has to take a keen look to differentiate it from the glass.

Although both devices are of the same weight and roughly the same size, a difference can instantly be noticed when held in hand simultaneously. The premium build of Nova 3 outshines the shimmer of OPPO F9 which is also noticeably more thick and hefty between the two.

On the front, OPPO F9 hosts what the company calls a waterdrop notch. It’s a reduced notch which only houses the front camera. We liked the notch on OPPO just because it did not hinder the view and gave more estate to play with.

The volume rocker and the power key are located on usual sides on both the devices and are easy to access even with one hand, thanks to the narrow aspect ratio.

However, we liked the fingerprint scanner placement more on Nova 3i. In OPPO the scanner is somewhat leveled with the phone’s surface which sometimes takes more than one try to read your finger accurately.

It’s sad to see that both the devices still use micro USB port for charging but OPPO has managed to sneak in a clever trick. F9 uses extra pins in its charging port to let more current flow which is how it supports the company’s VOOC Flash Charge.

Huawei Nova 3i and Oppo F9 pack similar screen size at 6.3-inch. Both the phones have the same FullHD+ resolution, i.e., 1080 x 2340 along with an impressive aspect ratio of 19.5:9 which translates roughly into a pixel density of 409 ppi. Despite the similarities, both the phones use different display technology and screen design.

The Nova 3i uses the traditional IPS LCD panel with a conventional wide notch summing up into a screen to body ratio of 82.2% wheres, the OPPO F9 sports the waterdrop screen with a tiny notch in the LTPS panel that gives a better 84.0% screen to body ratio.

Both the phones provide a decent display and sharp viewing angles. The colors are vibrant on both the phones but OPPO F9 has a little more accurate saturation between the two. In direct sunlight, both handsets behave equally and can be viewed with ease at full brightness.

The color looks more accurate on OPPO F9 while the screen seems more bright on the Nova 3i, so it all boils down to personal preference. For us, choosing the one with the better display is a very tough call to make, so it is a tie.

Long have we professed about how Huawei has improved its EMUI and transformed into one of the most stable and smooth operating systems out there. Same goes with the version on Nova 3i.

Though both the OS offers some tweaks for a more immersive experience like hiding the notch and a game suite for uninterrupted gaming, there are specific options that are exclusive to respective phones. EMUI lets you tone down your screen resolution to save battery as well as enable an app drawer if you are used to it.

ColorOS in the OPPO presents some of the best features like the Fullscreen multitasking which enables you to pick any specific app if you are within any app just by swiping inwards from the notch.

Owing to better optimization Nova 3i straightens out the notch while watching media. On the downside, the notch problem in F9 persists where the notch cuts down the part of media played on the screen which makes it annoying to watch any movie on the device.

Disappointingly OPPO F9 packs the same processor as OPPO F7, which is MediaTek Helio P60 so don’t get too excited for performance as it is not going to be a massive upgrade from its predecessor.

Huawei Nova 3i, however, is the first phone that comes with the company’s latest chipset, Kirin 710. It is a midrange SoC manufactured on a 12nm developmental process.

Both the phones carry the same 4GB RAM with the significant difference being the internal storage where OPPO F9 offers 64GB memory while the Nove 3i provides a massive 128GB.

As you can see both the devices perform similarly in benchmarks, its the GPU Turbo technology in the Huawei Nova 3i that makes the difference by enhancing the gaming performance and reducing battery consumption while playing resource-intensive games.

In real life usage, though negligible we noticed that F9 occasionally lags in intense gaming sessions however no such lag or hiccup was seen on its counterpart.

Regarding the battery, Nova 3i packs a 3340mAh battery that doesn’t support any fast charging which is why the device took a massive 2 hours and 48 minutes to juice up to 100% from flat. So make sure you have more or less 3 hours at your disposal to charge the phone.

OPPO F9, on the other hand, has a 3500mAh battery and carries the company’s VOOC Flash Charge technology which results in much lower charging time than its rival. The phone charged up from 0% to 100% in just 1 hour and 32 minutes even though it doesn’t carry USB Type C.

On similar moderate usage test carried out on both the phones, the OPPO F9 drained a 13% of battery whereas Huawei Nova 3i dropped 15% battery. This was already expected since the Nova possesses a smaller battery as compared to its competitor.

However, in heavy usage both the phone consumed an equal 20% battery which implies that the GPU Turbo in Huawei worked well to conserve battery which is why it came to head to head in battery usage against its counterpart.

As per the prevailing trend, both Nova 3i and F9 come with dual-rear camera setup. Having a similar Artificial Intelligence enabled camera setup with 16MP + 2MP lenses that we have seen in the P20 lite, both the phones capture amazing pictures with some shortcomings.

A very similar interface is stretched across the camera apps in both the phones. Switching between different modes is as easy as swiping left or right, and toggles for AI and Super Vivid mode are on the top of the camera viewfinder.

Similar camera modes are offered by the two rivals however OPPO F9 lacks the wide aperture mode that is present in Huawei Nova 3i, and the background blur is fixed in Portrait Mode OPPO whereas you can turn the blur on and off in Nova 3i in Portrait mode.

We noticed that the pictures came out pretty well on both the phones in Auto mode. Both capture details adequately. Evidently, the HDR mode in the F9 blew the colors away while Nova 3i did a much better job in brightening up the picture and maintaining control over colors in broad daylight.

AI works aggressively on both the phones. On Nova 3i you can turn AI on or off with a toggle whereas its equivalent on the OPPO is the Super Vivid mode. The color enhancement is unbearable on the latter while the former does a slightly better job although it, too, enhances artificially. 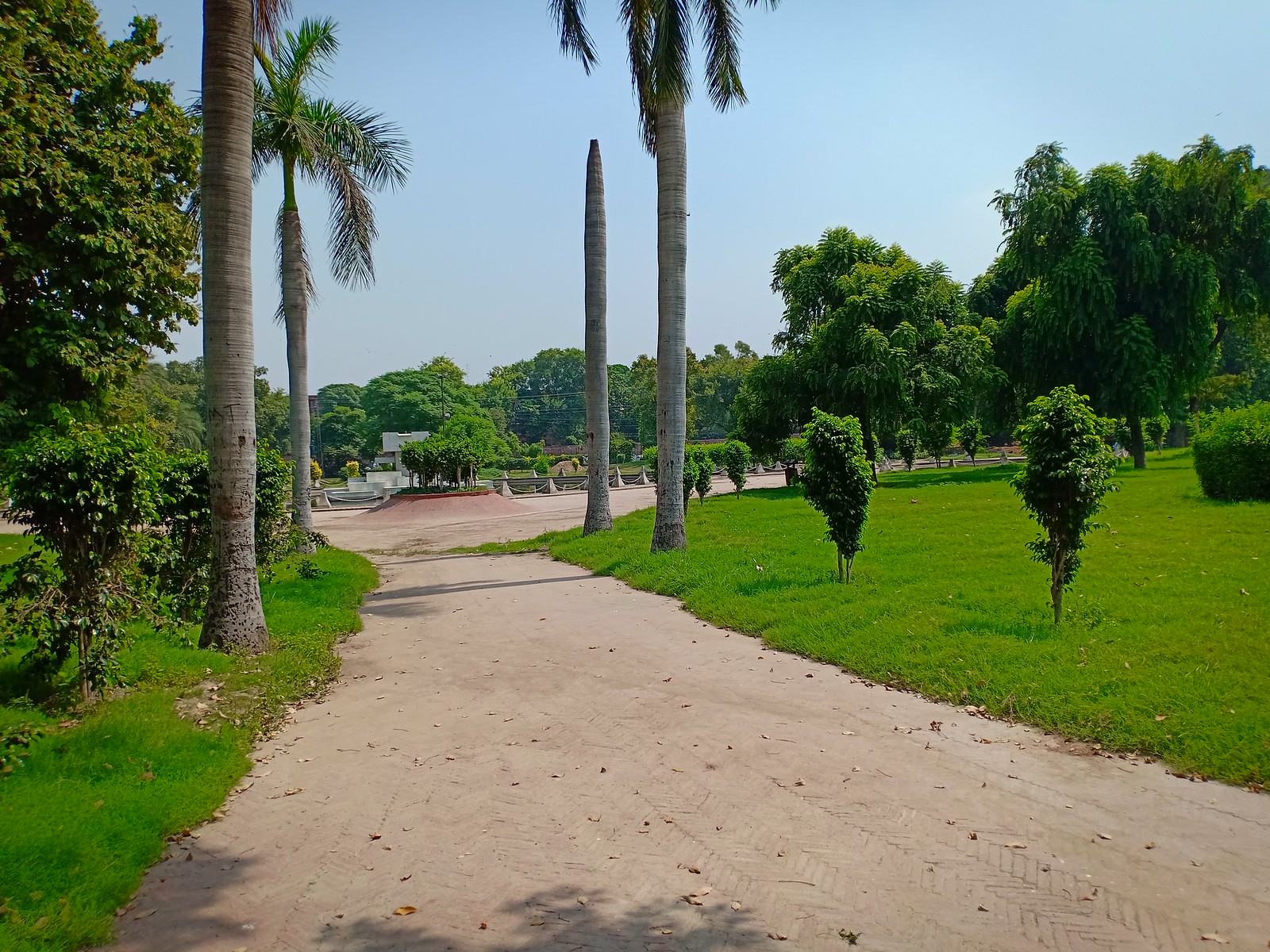 Indoor conditions are where cameras struggle to prove their worth. We noticed that the one on both the phones tend to over saturate the colors. However, Nova maintained a natural look while Super Vivid mode in F9 really blew it out of proportion.

The colors are more natural looking and close to reality in the Nova 3i and look artificial in the OPPO F9.

Astonishingly, at night with a well-lit subject, OPPO F9 wonderfully does an excellent job and produces crisp results as compared to the Nova 3i.

Both the phones have portrait mode which takes advantage of the secondary camera and blurs the background by applying a depth effect. Though both the phones recognized the subject well and uniformly applied the blur across the outline, we specifically liked the portrait with Nova 3i as OPPO F9 didn’t only was the colors away but also failed to capture details.

We also got the chance to test out the video mode in both the phones, so we did it just like any normal user would hold in the hand while walking in the park and alongside the road staying still.

We noticed that video shot with the OPPO F9 was more stable as compared with the one from Nova 3i which kept shaking. On the second clip, you can clearly spot the difference where OPPO managed to capture with more sharpness but lost the colors which were better picked by Huawei Nova 3i.

Both the phones come in the mid-range category and are priced the same at Rs 40,000 in Pakistan. Since a perfect phone doesn’t exist and despite the shortcomings, we have to remain content with whatever we choose.

Both the phones go head to head in design with their amazing gradient color, but Nova 3i takes the lead because of premium material. Though OPPO F9 doesn’t have any drawback in design, it’s only the plastic build that is prone to scratches very quickly.

Even though OPPO F9 is not equipped with any turbo technology, it does an excellent job of keeping up. The camera is won by the Nova 3i as its rival tends to paint every picture with the same brush, oversaturating the photographs and an unnecessary pop-up of colors.

Battery, however, is a major concern for a large number of users. If you are a gaming enthusiast, Nova 3i with its battery saving Turbo tech suits you better. Other than that OPPO performs much better than the Nova 3i in the battery compartment