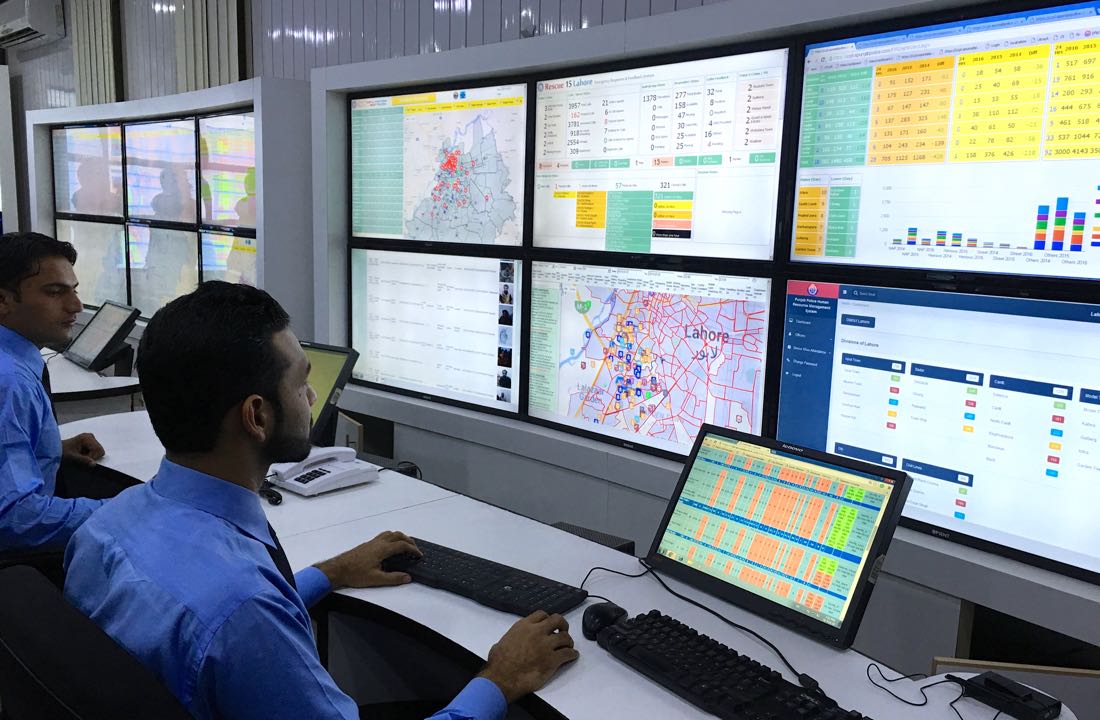 The Deputy Inspector General (DIG) Operations of Lahore Police, Haider Ashraf, exudes optimism as he discussed the many new initiatives that he and his colleagues have taken for reforming Lahore Police. He is hopeful that it will provide a new face to the police force: one which is softer and more citizen-friendly but, at the same time, vigilant and ruthless for criminals.

Indeed, this is the modus operandi of police in developed countries. Though how close the Lahore police is in achieving such a high standard is a question for many.

“We are not a model police force as of yet, but we have just started walking in the right direction,” Haider explains as he throws caution to the wind. But confidence seeps in as the DIG challenges to witness and judge the performance of his force by any standards.

Such claims piqued our curiosity, compelling us to meet with the Superintendent of Police (SP) Model Town, Lahore Police, Capt (r) Mustansar Feroz. In his early thirties, Mustansar proudly talks about his three-year-long journey that started in 2013 when he was stationed in Islamabad as SP City.

“Just a few years back, even for me, there was no way to verify the credentials of any person or vehicle on the spot,” the SP admitted.

“But now, when we are fighting against ever more trained and well-equipped terrorists and criminals, we couldn’t wait much and had to upgrade ourselves with what technology offers us today,” Mustansar added.

For officers like Mustansar, the first challenge was to create a national level vehicle verification system that could easily be accessed through an ordinary mobile phone without the need for the internet.

15 is the code for the service used to verify vehicles. The Islamabad Police got hold of the service in 2013 with the help of Ufone that developed the system and hosted the entire data and software.

This application showed necessary information on the screen of a mobile phone in a matter of a few seconds by just sending either the driving license number, CNIC or car registration number to 15.

From the on-screen menu, it was easier to verify an individual’s identity, the legitimacy of the CNIC, and vehicle status. The system even had the option to assign rights on the basis of the seniority level of personnel.

It is a free service, and the Ufone SIM inside has lifetime validity, which does not require the balance to be operated.

The vehicle verification system ran until Mustansar remained in the city. Soon, it was replicated in Rawalpindi, where another young SP, Haroon Joiya, made use of it, and later the implementation spread in other parts of Punjab including Chakwal, Attock, and Jehlum. In the following months, all the provinces had adopted this verification system except Baluchistan.

Two days after the terrorist attack at the Army Public School in Peshawar in 2014, SP Haroon Joiya asked Ufone to further modify the shortcode service so that an alert could be sent out to all concerned security agencies and officials across the city whenever an emergency situation occurred.

Ufone once again developed a mobile application supported by well-integrated systems that generate an alert on multiple levels.

As soon as the shortcode *55# is dialed, an alert pops up on the dashboard of the system along with the GPS location of the sender. At the same time, the system sends text messages to the mobile numbers of concerned officials about the emergency situation and also generates an auto-call to registered phone numbers. By using multiple mediums, the system urgently informs all the relevant security departments about the emergency.

To avoid pranksters from misusing it, the shortcode can only be dialed from the mobile phones which are registered with the police department.

“We are not only registering our own officials who are in the field, but also the citizens in organizations like schools, banks, jewelry shops, etc., because they are vulnerable to criminal activities such as robbery, dacoity, terrorism, etc.,” Haroon Joiya revealed.

“So far, the Lahore Police has registered 164,000 mobile numbers of people in the community including 60,000 schools all over the province,” Haroon added.

Police in Pakistan has been running its affairs based on a system that is centuries old and is need of a complete overhaul.

Lack of interest from the force and absence of a mechanism for record-keeping of criminals, human resource management, and monitoring of activities at every police station are the areas every government, military or democratic, has been avoiding to address. But as the DIG Operations mentioned, Lahore is the place where standards are being set today, and they are likely to be followed soon by other cities in the country.

The two SPs, the CCPO, and the DIG Operations have taken a keen interest in adopting new techniques of policing in the city. As a result, there has been a remarkable improvement in the following areas.

Texting is better than calling 15

Sending SMS on 8330 is a more efficient way of calling the police for help rather than relying on the old 15 system. Since the inception of 15, it has remained controversial due to its inability and capacity to deal with the latest challenges. But unlike in the past, the 15 emergency calling system has been improved to a great degree. In Lahore, the central system is working in the police headquarter, where all Lahore-based calls land on a dashboard. The dashboard categorizes them on the basis of crime and police station and relays the same information to concerned officers in the field who are in police vehicles with tracking systems onboard.

There is another, faster way of contacting the police through SMS. Just dial 8330 from your mobile phone and the text will be received by several police officers of various domains. The SMS carries all the necessary data including the sender’s location for a quick response from the police.

“With 15, our average response time is 20 minutes, but we are bringing it down to 15 minutes with the help of the SMS service,” Mustansar informed MORE.

“The field force maps the crimes digitally, and, at the end of the day, I can easily have a report about the nature and number of crimes within the boundaries of a specific police station, which is, of course, performance measuring unit of the local staff,” added Mustansar

The brainchild of the Lahore Police and the PITB, the system serves the department throughout the lifecycle of a First Information Report (FIR). The software, available at almost every police station in Lahore, has the ability to store the information of the complainant and the accused. Once the information is entered, it is transferred to a central server. At any point in time, a senior officer of the police can contact the complainant for the feedback to know his/her satisfaction level.

Furthermore, officials at the local police stations are required to enter all the details of an investigation as well as court proceedings into the system.

No matter what the size and nature of a case, a well-maintained database of habitual offenders and fugitives always plays a major role in ensuring the case reaches an early conclusion.

Umar Riaz Cheema, SP Criminal Record Office, raised this requirement of developing the database of all the criminals and convicted people.

The software can categorize criminals on the basis of age, color, caste, ethnicity and a multitude of other parameters, making it effortless to look and match all possible suspects in any crime. This criminal database can be accessed even more easily on a smartphone.

So far more than 80,000 criminals in Punjab have been entered into the database.

Monitoring of Police Stations through Skype

With cameras installed in every police station of Lahore, someone at the head office can watch the live handling of complaints. This Skype-based video communication is another initiative of Lahore police’s tech-savvy officers. It gives a very clear message to the local staff and the complainant at the same time: “Hey! We are watching you 24/7!”

Police sources have confirmed that video monitoring through Skype has improved the performance of staff at police stations.

Linked with the criminal’s record database is the fingerprint management system. When a criminal is arrested, the police take the digital fingerprint impressions of all 10 fingers from every possible angle. This database is a lot more advanced than what NADRA holds on its servers. In its testing stage, the time required for tracing any criminal through fingerprint records came down from 15 minutes to a few milliseconds.

The Lahore Police will soon provide Android-based handheld devices to its ground-force that will have a local copy of fingerprints of the entire criminal- base, which is also maintained at the PITB servers. It is expected that the strategy will further tighten the noose around criminal elements in order to reduce the chances of a possible criminal act.

This system is Lahore Police proprietary and developed indigenously in Pakistan by PITB. So if there is a crime, police will see its own database first and then consult NADRA.

Lahore is a city of around 10 million souls with approximately one-fourth being residents who come from within and out of the city. This poses a security threat that may well be exploited by the criminal-minded and the likes. It is now a necessary act for the owner of the property to provide the details of a tenant to the local police station.

With the help of the Tenant Registration Software and Criminal Record Database, Lahore police are also planning to start providing clearance certificates to property owners for their tenants.

Automatic Number Plate Recognition is a state-of-the-art early detection system for spotting a threat from a vehicle or a person from a distant place and take action accordingly.

The automated system consists of high-speed cameras that can be installed on roads and buildings and have the ability to scan the slightest of movements even in the dark with the help of infra-red vision. These fast detection cameras capture the number plates of all vehicles and instantly checks them against the database for the stolen vehicle.

Once the vehicle is detected, the software will show a red alert sign on a live screen and on-ground. The first picket, usually 500 meters from the point of detection, would be in a better position to counter it.

The system is very flexible and can throw email and SMS to all the concerned police officials that a suspicious vehicle is entering the city.

Along with vehicles; number plates, the software can also scan the face of the driver, which can match with the criminal database of Lahore Police for generating similar alerts.

The convincing factor for this solution was the amount of time and hassle that an officer at entry points across the city faces when they stop a vehicle for document and show of proof. For stolen vehicles, documents can be forged as well, which is not possible to detect on the spot.

Now they can know on the spot if the documents are fake or if the person behind the wheel is a criminal.

Every crime has 3 elements: perpetrators, vehicles, and weapons. NADRA has recently started the digitization of arms and ammunition data which was manual earlier. The database of offenders and vehicles have been integrated with NADRA to give a better judgment on the ground.

The ANPR will help establish a local Exit Control List (ECL) that will gradually be scaled up to the national level for controlling and tracking movements of criminals, vehicles, and weapons within the country.

Interestingly, the entire ANPR system cost just a few million rupees, and it cannot be compared with the billions of rupees that are being spent on creating safe cities.