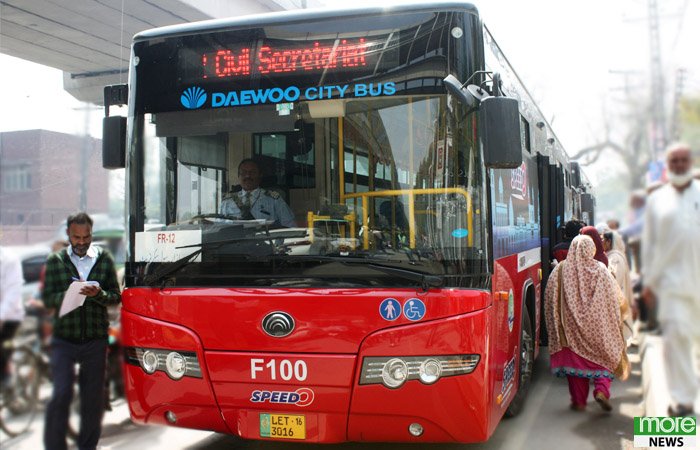 Finally, after much speculation and wait government of Punjab has introduced Metro Buses for feeder routes in Lahore. The service inaugurated by CM Punjab Shehbaz Sharif has 200 buses that will cover 14 routes with the distance of around 130 KM.

The fully air-conditioned buses have 28 seats where 9 of them reserved for ladies and 19 for men.

The Metro Buses have 8 security cameras, where 4 are placed on the door, 2 at the driver’s side, 1 at the back and 1 outside the bus the that can monitor the traffic behind.

The passengers need to have a Metro Card which can be bought from inside the bus or Metro Bus Stations.

A passenger can buy Metro Card for PKR 200 from inside the bus, where the card cost PKR 130 and PKR 70 is the balance, that can be recharged from the Metro Bus stations.

If a passenger desires to only buy the card without the balance or include more balance, they can go to the Metro Bus station.

On entering the bus, a passenger has to scan their card, where it automatically deducts the amount i.e. PKR 15 for regular charges whereas if a person traveled on Metro Bus and is going to travel on the Metro Buses for feeder routes, he will be charged PKR 5 only.

A regular person on scanning the card will be charged PKR 20 where he/she needs to scan it again while leaving to get a refund of PKR 5.

The provincial government is not going to end the regular LTC buses but their routes would be changed and they also wouldn’t stop at the bus stops that assigned to metro buses fo feeder routes.

Feast your eyes on the Metro Buses for feeder routes: