In the past few years, the young generation has changed the way we use and admire smartphones in this world. We have reached an era where there are too many options for users and thus every smartphone manufacturer is trying to grab the consumer’s attention but only a handful have managed to accomplish this task. Realme is one of them.

Since its inception, the company has been introducing some amazing devices with beautiful designs and top-notch specs. The recently released Realme 3 is no exception. The smartphone is available for Rs. 28,999 and in our first impressions, we noticed that the smartphone comes with magnificent design and specifications but are they enough to entice us into buying this device? Let’s see in our detailed review:

To bring down the price of the smartphone, many companies try to tone down many specs of their device including the design but Realme 3 has managed to pull through this obstacle. The smartphone comes with a unibody design which even though has a polycarbonate back, feels premium from every angle.

The glossy finish of the smartphone maintains the illusion of a glass body adding to the visual appeal of the Realme 3. At the same time, you will have to use a phone cover at all times as Realme 3 is a fingerprint magnet otherwise you’ll have to wipe the back of the device quite frequently.

At the back, we have a dual camera setup which is placed at the top left corner while the fingerprint sensor is positioned at a very advantageous position (in the middle) making it very easy to reach it with your index finger.

The power button on the right side is also quite accessible even though Realme 3 is a large phone.

The volume rocker is placed at the left side instead of the right along with a SIM tray which can also be reached without any fuss even if you have smaller hands.

At the bottom, we get MicroUSB charging port and it is a shame that the USB Type C still has not made its way into the mid-range devices of this price segment. Furthermore, we also have a headphone jack and speaker grill at each side of the charging port.

The phone requires two hands for operation and is surprisingly quite light making it a suitable device for prolonged usage.

Realme 3 comes with 6.2 inches of a large display with more screen space due to the presence of waterdrop notch that houses the front camera and other sensors. The smartphone comes with 1520 x 720 pixels of screen resolution which seems a bit low for the such a huge display.

Due to the 720p resolution, you cannot expect very crisp images but are they bad enough to put you off? Absolutely not. You can find decent color saturation though we would have loved to see FullHD display.

This year, the waterdrop notch is still in a high fashion and on Realme 3 it does not cause any hindrance while you are watching videos or playing games on the smartphone.

We didn’t face any issues while looking at the display indoors as well as outdoors in direct sunlight. The viewing angles of the phone are also great indoors while the sides fade away in the outdoors.

All in all, Realme 3 offers a good display and 720p will help keep the cost down of the smartphone.

The phone runs on ColorOS 6 based on Android Pie. We get an app drawer right out of the box and the first thing that we come across are the unique two navigation buttons instead of three; home and back button. If that is not to your liking, you can always change it to standard virtual buttons or can navigate via simple gestures.

You will not be getting all features of Pie like Digital Wellbeing which lets us know how much time we are spending on a certain app but it is in no way any lesser than the other devices in the market.

For gamers, Realme 3 comes with a Game Space feature to boost the gaming performance and provide additional options like do not disturb mode and brightness lock mode, etc.

To ask Google for assistance, you can press the power button for a short time or can just say  “Ok Google” in a loud voice.

Realme 3 is powered by MediaTek Helio P60 octa-core chipset coupled with a 4GB RAM along with 64GB internal storage. Following are its benchmark scores:

During our testing, we noticed that Realme 3 works flawlessly in moderate testing and can perform any day to day operations without ease. Despite being an older chipset, P60 has enough might to carry on the tasks without any problem.

In our heavy usage tests, we experienced some lag especially when we tried switching from one heavy app to another. If you are playing a single heavy game like PUBG, Deer Hunter or Real Racing 3 and are not switching between apps, the phone will work just fine.

We know that P60 is a great chipset for mid-range devices and thus can conclude that the small nuisances are because of problems with software optimization and can be resolved with an update from the company.

The smartphone packs a massive 4230mAh battery and we were quite impressed with its performance. In our light usage, it consumed only 12% of battery while it consumed only 16% battery during heavy usage. The 720p also helped the phone to maintain battery life for a long time.

Realme 3 comes with a dual camera setup on the back featuring 13MP primary sensor and 2MP of depth sensor. The company has revamped its camera app which comes with AI scene recognition that can that recognize 16 independent scenes and 100 scene combinations.

In the app we get only three main categories; Photos, Videos and Portrait and to further explore, you’ll have to tap the “options” icon represented with three lines.

The phone’s camera can take quite decent shots though sometimes it struggles to take a picture giving washed out colors; overall we don’t hate it.

The HDR feature can present oversaturated images as compared to the auto mode resulting in overexposed pictures. The Chroma Boost feature also has the option of increasing the saturation of the picture.

Nightscape is another new feature in Realme 3 that uses AI and multi-frame exposures to give you a brighter image in low-light. In real life testing, we have seen that it can take decent shots in well-lit places at night but you’ll experience some noise in the background.

Being a budget device, we do not expect any eye-opening miracle from the phone’s camera and we have seen that it is good enough to take some decent shots.

At the front, we have a 13MP sensor which can take amazing shots in the day and sometimes struggles in low-light conditions.

It also comes with the  AI beautification feature which is now present in many Chinese phones which lets you do different things like as smoothen your skin, slim your cheekbones, etc. 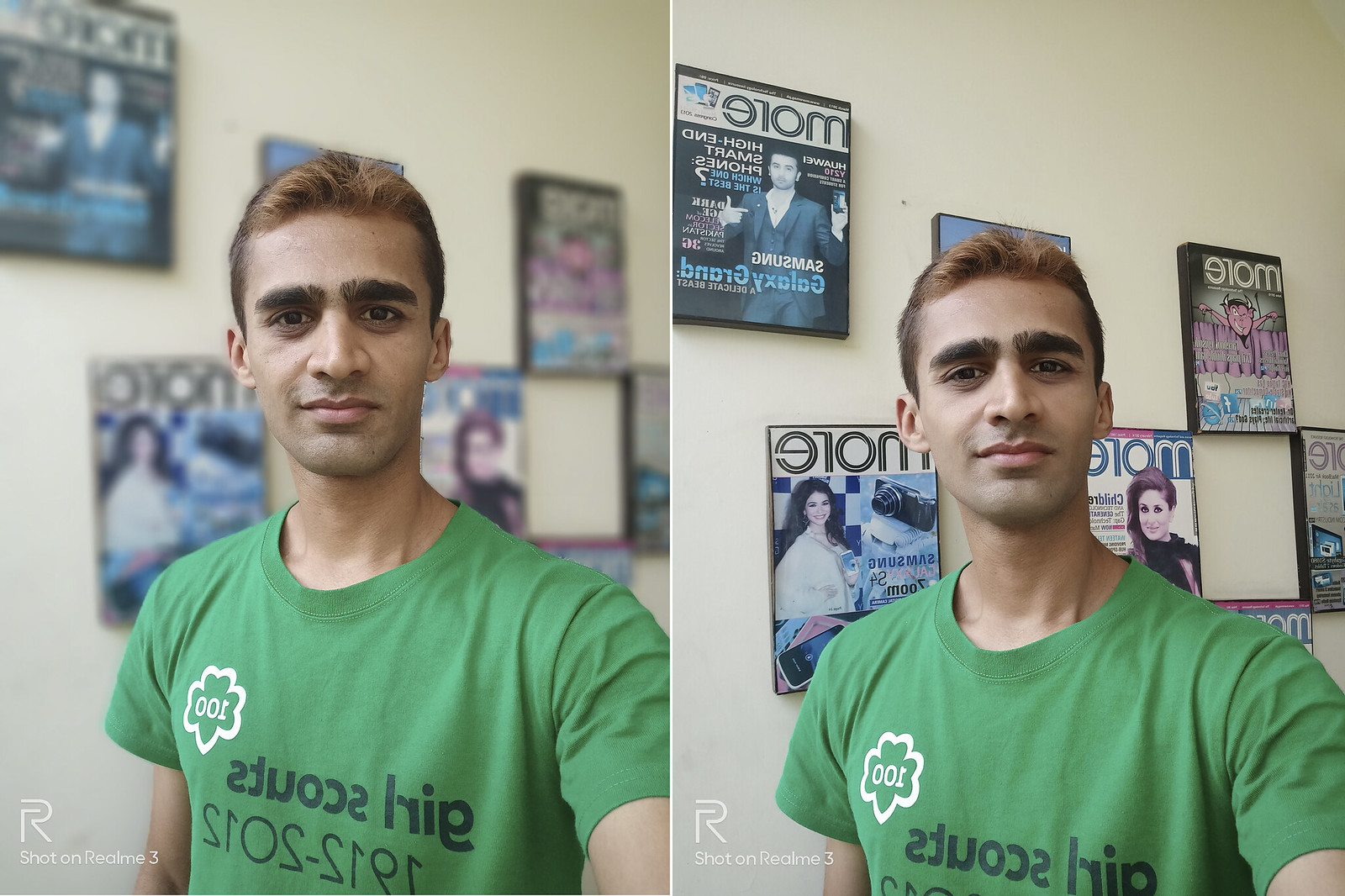 Realme 3 comes with glitzy design, great battery, good gaming experience, and a decent camera and while multitasking is not too great, there are not too many complaints when we are using the smartphone.

It is a perfect device for people who are upgrading from entry-level phones or are moving forward from the typical everyday use of the smartphone and want a 4GB RAM in affordable price.