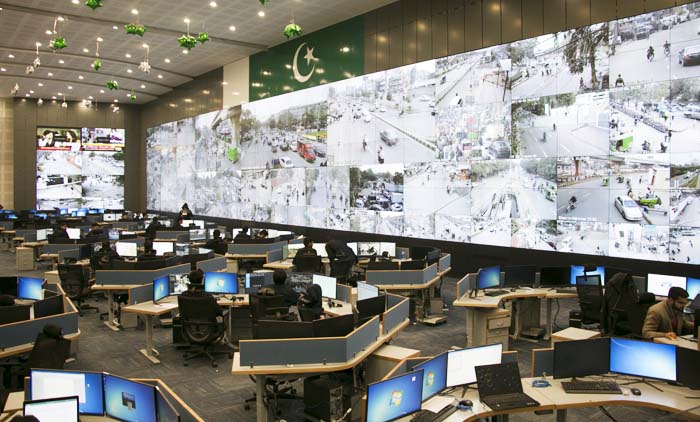 Monitoring a city through surveillance cameras is not an alien concept. Several countries have extensive surveillance camera networks to supervise what is happening around the city. Beijing, China has the largest CCTV network with more than 400,000 cameras, followed by cities of likes London, Chicago, Houston, New York.

In Pakistan, the idea to surveil an entire city was introduced around six to seven years ago by the introduction of the Safe City project in Islamabad where around 2000 cameras are installed in the capital of Pakistan to oversee the security of the city.

Last year, a pilot project with the same idea started in Lahore, only on a much bigger level than anything the country has witnessed before. In October 2016, CM Punjab Shehbaz Sharif officially inaugurated the Punjab Safe City Project following his vision to make the province crime-free and create a peaceful atmosphere for the citizens.

To answer the question of whether being surrounded by thousands of cameras makes people in Lahore secure, MORE had an exclusive conversation with Akbar Nasir Khan, Chief Operating Officer of the Punjab Safe Cities Authority (PSCA).

Giving an overview of the entire project, he describes that PSCA has developed an establishment, Punjab Police’s first Command, Control and Communication (PPIC3) system that aims to not only improve the investigation, police-citizen relationship, the attitude of the force but it is an effort to better the operations of the police.

He is of the opinion that if the operations are good, policing will also be good. PPIC3 comprises of three primary components; emergency integrated response, intelligent traffic management, and dealing with terrorism.

He described that similar to the helplines in other countries, 999, 1122, 911, citizens would be able to call one single number when they encounter any emergency, and in return, the state will provide them the required help and relief.

The main idea behind the emergency integrated response is that whatever a problem a person faces, he should call one number ’15’ instead of dialing different numbers for different situations.

Mr. Khan explained that under the safe city project, the Punjab police could accomplish intelligent traffic management as it enables them to control and monitor all the traffic signals of Lahore. They can also adjust the volume of traffic according to the load on the roads on a particular day and time.

Moreover, through PPIC3 they will also be able to replace the traffic police with surveillance cameras as the number plates recognition ANPR cameras can issue e-challans. The new system, he describes, will surely put the traffic warden out of his misery as they do not need to stand for hours to keep an eye on the traffic violations.

With this new system, not only there will be an evidence-based e-challan regime, police will have proof of the traffic violation. They will also be able to update drivers about the road situation.

In this regard, the Authority has developed a mobile application where a driver can receive texts about the condition of traffic on different roads so they can adopt the easiest way to get to their destination.

He relayed that they also plan to install digital signage on the roads, controlled from their command center they will inform people about the traffic situation. Also, Rasta FM 88.6 will also guide people about the movement of traffic.

PPIC3 can also help in the fight against terrorism as Mr. Khan described that through 8,500 cameras installed in various places, PSCA would be enabled to monitor and scan any suspicious person or event that may require a prompt response by the police.

The cost of the entire project is $120 million which is being funded by Asian Development Bank (ADB). Mr. Khan explained that the fund would be covering the technological components; including the installation of cameras and maintainability of equipment over the next five years.

Lahore is known for its culture, food, and beauty. Another thing that the city takes credit for is bungled traffic management. According to various surveys and reports, the lack of discipline on roads is one of the primary reasons for deteriorating living standards in the city. Blue-uniformed traffic wardens, deployed by the previous government, haven’t been able to produce results in more than ten years.

Mr. Khan believes that the serenity of Lahore can be attained with the help of a smart traffic system, excluding the human variable from the equation. The presence of traffic wardens has not reduced the infringement of traffic laws in the country, where many have been scandalized in the wake of corruption and dishonest practices like not issuing a challan and letting the people go after taking a small bribe. By eliminating the human element, the violation of traffic rules can decrease quite rapidly.

PSCA through e-challan systems aims to regulate better traffic management as cameras would be responsible for capturing the traffic violations on the road. People would not be able to get away with the infraction of law as instead of pleading with a traffic warden, they will be served with a notice generated by an electronic system.

The e-challan system is in its pilot phase which was tested in a smaller area on Mall Road. The test revealed that around 62% of people had valid car registration whereas 20% had not updated the information like the transference of car’s ownership or changing their house address etc.

They were unable to reach the rest of the 18% of people in their sample and are planning to create an effective way to include them in their empirical data. PSCA is running an awareness campaign about the e-challan system, and they plan to expand the said system in the future.

Mr. Khan explained that even if they install ANPR cameras, people will always need someone who can timely provide relief to anyone in distress.

This new change would likely reduce the number of people required to manage the traffic. However, Mr. Khan could not comment on how many reductions they would have to make in the force after replacing men with machines.

Data sharing is critical in the safe city project as any hindrance in the exchange of relevant information can deem all the efforts null and void. The coordination of the government departments has not been exemplary in the past, but Mr. Khan proclaimed that they have good coordination with other departments such as excise, police, and PITB, etc. due to which they have not faced problems in the data sharing process.

The sad reality of Pakistan is that most of the drivers are not licensed, and usually many children in their teens get behind the wheel of the car or start riding motorcycles, which clearly is against the law, and there aren’t any effective measures present to stop such practices.

Apart from camera monitoring, Mr. Khan wishes to see a new set of rules to ensure that whoever buys the car is a licensed driver. Also, should be the duty of the owner to check the driving license of the other person in case he/she is lending his/her car to anyone.

Tracking the location of the distressed caller to provide timely assistance is one of the biggest challenges for PSCA as by acquiring the exact location of the caller they can dispatch the nearest Dolphin team to their help.

PSCA is currently in talks with the PTA, Ministry of Interior, and several other departments and agencies to enable the option of tracking the location of any caller. Mr. Khan said that all the stakeholders agree on this principle idea but the process needs to map out very intricate details, and as it concerns the privacy of the users, it will take some time before it is implemented.

Until the PSCA gets the required permissions to track their caller’s location, they have developed a mobile application that has a particular segment for women’s safety. If someone makes a complaint on 15 helplines using the app, the location can be traced by the authorities.

This new development aims to empower women by battling street harassment. The idea of the mobile app is similar to the one launched in India a couple of years ago, and he believes that around 1000 downloads in only one month, is a sign of its success.

Pakistan has become a country that enjoys more than 135 million mobile phone subscribers, and with the advent of 3G and 4G in Pakistan, connectivity appears to be a problem of the past.

However, unscheduled road diggings and various other activities including terrorism can hamper the countrywide connectivity in no time. PTCL’s recent fiber cut-off that caused a countrywide data disruption is a precedent.

The COO asserts that PSCA has diverse means of connectivity to communicate. With police stations, they rely on fiber optics whereas for staying connected with the Dolphin Force they use the wireless network.

However, Cybersecurity is another area that will play a significant role in running the show. Just like we kept ignoring the fruits of 3G and 4G technology for over a decade and welcomed it only recently, Pakistan was able to enact its half-cooked Cybercrime Law this past September, while an entire Cyber Security Policy is still missing.

Akbar Nasir Khan does not undermine the situation since mega projects like Safe City should have a foolproof security system for its entire network on which they heavily rely. He calls cyber security more of a global phenomenon; however, he started to have taken all the precautionary measures for infallible digital security.

The biggest threat that a cyber security breach presents is the loss of citizens’ data. Keeping this prospect in mind, PSCA as a preventive measure will only keep the necessary data with themselves while deploying all required protocols to ensure its safety.

In case the authority is ordered by the court, they have the capacity to store the surveillance data for seven years.

The safe city project in Lahore is being accomplished with technical support from the Chinese company Huawei, which raises the question as to how much of the data is accessible to their vendors.

Mr. Khan declared that their people are on par with Huawei’s technical skills, but the entire data exchange is disconnected from their providers and is entirely handled by a Pakistani team. The practice of seeking foreign help in database management is a standard for departments like PTA, NADRA, etc. and PSCA hopes to gather the same technical advantage through the services of their Chinese vendors.

Completion of the Safe City Project

The screens from the live feed are being monitored by a team of 200 people, as the installation of smart cameras does not require people to watch the screens at all times.

If there is a situation that requires monitoring for instance if someone enters into a no-entry zone, the camera will trigger an alarm and would thus alert the relevant authorities. For the e-challan system, they have installed 100 ANPR cameras and planned to mount around 650 more.

The Safe City project is an excellent initiative by the Punjab government which through its surveillance network promises to provide safety and security to Pakistani citizens in the future and we really hope that through effective implementation, the law and order situation will be improved not only in Punjab but in the entire country.

The interview was originally published in the February 2017 edition of MORE magazine.

Mudassar Jehangir is the founder and Editor In Chief of More News and More Magazine. He is a tech enthusiast who loves to write, travel and click the camera.